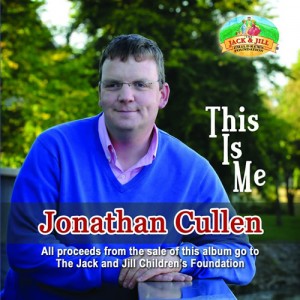 Jonathan Cullen is a well known figure in GAA circles in county Tipperary and he is currently secretary of the Mid Tipperary GAA Board. Jonathan’s love for music and singing goes right back to his primary school days in Castleiney NS when his then teacher, Annie Scott encouraged him to sing and perform at every available opportunity. After leaving school Jonathan became a member of the Moyne Variety Group and played leading roles in numerous musicals and plays.
It has always been a dream of Jonathan’s to record a CD of some of his favourite songs and now thanks to the help of sponsorship he has put together this eleven track CD in aid of the Jack & Jill Children’s Foundation, called ‘THIS IS ME’.
Jonathan chose the Jack & Jill Children’s Foundation because of the huge help and support it has been to him and his wife Mairead since their son Harry was diagnosed with cerebral palsy in April 2010.
The CD will be launched on Saturday September 29th in Nolan’s Bar Castleiney @ 9:30pm and it is available online on:
jonathancullenmusic.com