Last Friday we’ve posted on our Facebook Page a message from The Extra Special Kids Group calling on general public to support the campaign against the proposed site for the National Children’s Hospital. Since then, their appeal has reached over half million people with over 5400 sharing the story and hundreds commenting in favor! 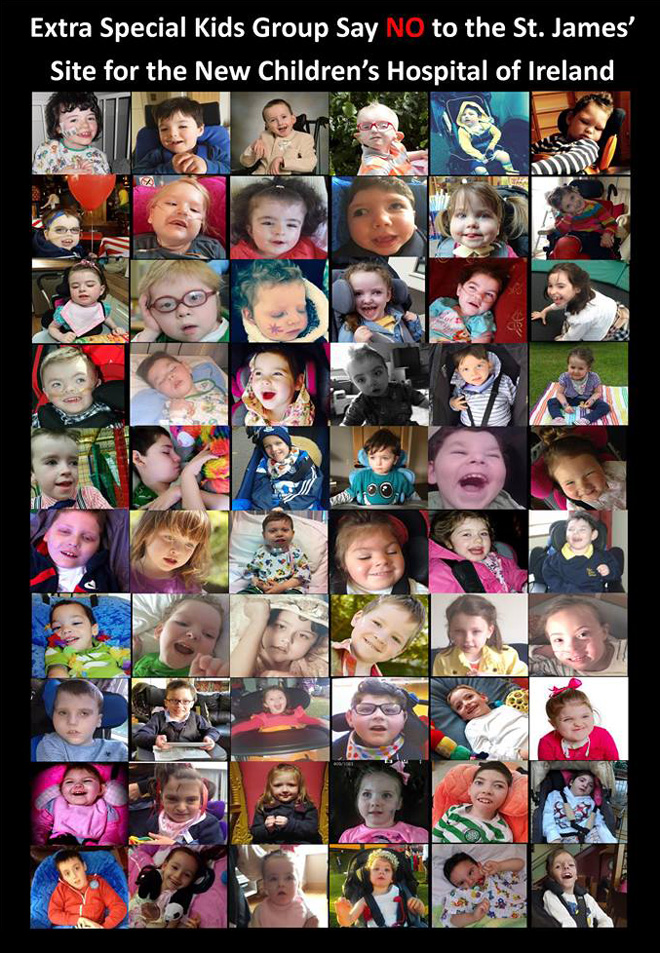 “We are a closed Facebook group with 150 Irish members, all mothers of very sick children. All our children have rare and complex needs and need 24 hour care. They have what the medics call ‘life limiting’ or ‘life threatening’ conditions. They have no voice or no vote in this country, but they do have a right to the best possible hospital care and we their parents, their grandparents, aunties, uncles, godmothers, brothers, sisters and friends can speak up for them.

On their behalf, we say NO to the Children’s Hospital of Ireland being constructed on the proposed site at St. James’ and here is why:

Hospital should be stressful because your child is ill, not because the hospital environment itself stresses you out because it’s unsuitable, unsafe, inaccessible, just wrong.

For all parents, we ask that you just sit down and think about it, someday, you may need to bring your child to hospital in Dublin and we want to ensure that Ireland’s children get the best facility, in the best location. If we have to endure what is being proposed for St. James’, we will have failed our children and generations to come. The only thing going for this planned facility is the fact that it’s a new building, but it can be a new building in the right location with your help!!

We support Jonathan Irwin of the Jack & Jill Children’s Foundation and many others, with the option of moving the hospital location to a greenfield site at Connolly Hospital in Blanchardstown on the M50 and here is why:

The Children’s Hospital of Ireland planning application is now live and open to objections. There is one week left to submit an objection. We plan to submit our objection on D Day, Friday 2nd October to An Bord Pleanala and we would appreciate your help to create public awareness of the situation. You may even submit your own objection!! The submission is simply a letter outlining your opinion to the planning related matters such as transport, parking, space for expansion, effects on the human being. There is a fee of €50 so it will not be possible for many but if enough people submit opposition, An Bord Pleanala will have to host an oral hearing where we will get the opportunity to articulate our views in person.
Please Like and Share to show your support
Thank You!
The Extra Special Kids Group“