Toyota Ireland, proud sponsor of Munster Rugby, is delighted to announce The Jack and Jill Children’s Foundation as the nominated Irish Charity who will receive the 17 limited edition Munster jerseys to help raise much needed funds. The unique jerseys which feature a “Toyota Auris Hybrid” logo, were worn by the team at all three Heineken Cup home pool matches and are signed by every member of the Munster squad. 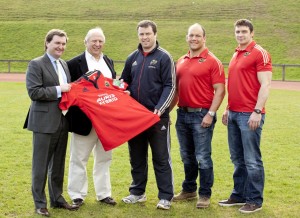 The Toyota Charity Giveaway draw ran on the Toyota Ireland Facebook page during February inviting the public to nominate an Irish charity. More than 100 different Irish charities were nominated. The Jack and Jill Foundation was randomly selected from all the nominations received. In addition, anyone who nominated a charity was included in two weekly random draws of 4 tickets to watch a Munster Rabo Direct Pro 12 game.


“Toyota Ireland is delighted to be able to support Irish charities in any way it can and we thought that the idea of allowing people to nominate a charity to receive the limited edition jerseys provided a novel way of raising much needed funds. We would urge collectors of Munster memorabilia and anyone in the position to support The Jack and Gill Foundation to dig deep and help raise money for this truly worth charity when the jerseys are put up for auction.” (Ian Corbett, Marketing Operations Manager, Toyota Ireland)
“We at Jack and Jill are delighted to be the recipient of the signed Munster Limited Edition jerseys from Toyota Ireland which we will auction and turn into nursing hours for the 288 families nationwide currently under our wing.” (Jonathan Irwin, CEO, The Jack and Jill Children’s Foundation)