Ardclough GAA is delighted to announce its donation of €700 to a local family through the Jack & Jill Foundation.

The club raised the money through its annual memorial charity football match on St. Stephen’s Day in memory of club member, the late Paddy Cullen and presented it to 7 1/2 year old Jack and his sister Molly (9) and mother Aisling McNiffe.
Paddy Cullen was actively involved in Ardclough GAA until his untimely death in 2003 after a prolonged illness. 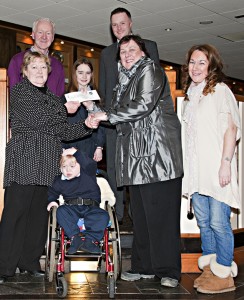 Paddy played both football and hurling for Ardclough GAA and gave generously of his time as a manager, trainer and selector for the various hurling and football teams within the club, he was also one of the founding members of Ardclough Golf Society in 1979.
He was unusual in the sense that despite being a born-and-bred Kildare man, when it came to intercounty allegiances he was an out and out Kerry supporter, often travelling down to Killarney to watch his adopted side both train and play and attending 35 Munster Finals in a row, as well as being a religious reader of The Kerryman.
His love for the Kingdom even extended to him calling his youngest child Kerrie – and Kerrie’s boyfriend, Billy Moore, an Australian who travelled from downunder with her to make the final, not only togged out but played robustly and netted a vital goal for the winning side.
The club is proud to remember him with the annual match but also Paddy’s memory lives on through the money raised for charity on a yearly basis through this nearly decade old tradition started by his wife Christina.
Over €10,000 has been raised in that time with The Jack and Jill Foundation, Children’s Sunshine Home/LauraLynn, The Irish Kidney Association, Athy Nursing Home and St. James Hospital Cancer Research all benefitting from the amounts raised.