Esso On the Run & Nine One One support Jack and Jill

Esso On the Run & Nine One One support Jack and Jill 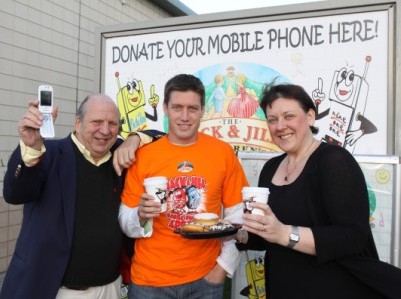 Ronan O’Gara launches new Esso On the Run & Nine One One campaign where customers are given free coffee & donut when they donate an old mobile phone in aid of Jack & Jill Children’s Foundation
Irish rugby star Ronan O’Gara took time out from training to launch the new Esso On the Run & Nine One One campaign where customers can claim a free coffee and donut when they donate old mobile phones in store in aid of the Jack & Jill Children’s Foundation.  There are 30 Esso On the Run & Nine One One stores throughout Dublin, Meath, Louth, Carlow and Kildare.
Welcoming the new initiative Jonathan Irwin, founder and CEO of Jack & Jill said, “Encouraging people to donate their mobiles in such convenient locations and giving them a tasty incentive to do so is a great idea.  We know there are nearly 10 million old phones just gathering dust out there and 250 phones buys home nursing care for a sick child for one month.  Mobile phone recycling is our main source of income at Jack & Jill and we are very grateful to the Esso On the Run and Nine One One stores for supporting us.”
To listen to the Radio Ad Click here 911 ESSO – JACK & JILL