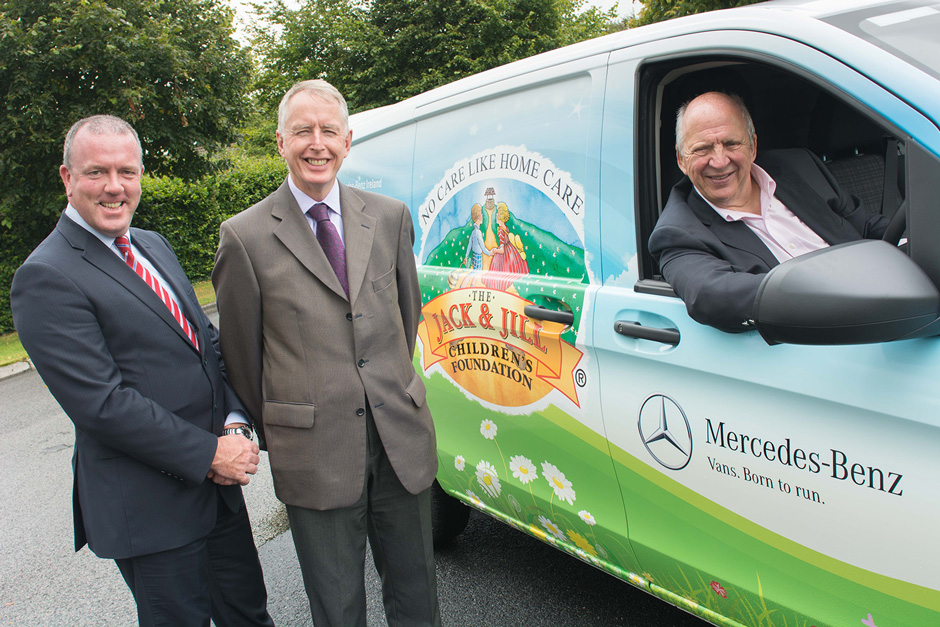 Noting the organisation’s ongoing need for a vehicle with load carrying capability for the charity’s new venture into charity boutiques, Mercedes-Benz commercial vehicles sales manager in Ireland, Fergus Conheady, has provided the Foundation with a new model Mercedes-Benz Vito panel van.
Operating from the organisation’s headquarters in Johnstown, Kildare, the new Vito will be put to work transporting items between the Foundation’s three charity boutiques in Naas, Newbridge and Arklow and thereby providing much need support for the charity.
Speaking at the handover of the vehicle, Mr. Conheady said:

‘The Jack & Jill Foundation is recognised and applauded for the very important work it does in helping sick children and their parents. Mercedes-Benz is proud to support that work by making a new Vito van available to them for their extended use’

Thanking Mercedes-Benz for their support, Jack & Jill Foundation CEO, Mr. Jonathan Irwin said: ‘We are delighted that an organisation like Mercedes-Benz would recognise the work that we are doing and our new Vito van is invaluable, particularly as we open our third charity boutique in Arklow, with the other two up and running in Naas and Newbridge and more to come before the year is out. On behalf of the 300 children and their families nationwide who rely so much on the service we provide, I want to say a huge thank you to Mercedes-Benz’.