WIN a class trip to Base Entertainment Centre with CHANGE FOR CHARITY!

Home Latest News WIN a class trip to Base Entertainment Centre with CHANGE FOR CHARITY!
NextPrevious

WIN a class trip to Base Entertainment Centre with CHANGE FOR CHARITY!

STARTING BACK AT SCHOOL???
Sign up before the end of September for the Change for Charity campaign and be in with a chance to win a class trip to Base Entertainment Centre, Celbridge! 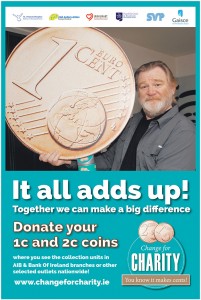 Jack & Jill have been selected as one of the charities to benefit from the new ‘Change for Charity’ campaign, in which Jack & Jill are asking you to get involved with.
Change for Charity is the brainchild of Norma Smurfit and is based on the Central Bank’s Rounding Initiative which took place in Wexford in 2013 to try and reduce the number of 1c and 2c coins in circulation in Ireland. This is a Nationwide Fundraising Campaign which will hopefully raise much needed funds for Charities across Ireland.
The profits from the campaign will be divided 6 ways – equally to the 5 charities (Irish Heart Foundation, St. Vincent De Paul, Irish Autism Action, Gaisce and St Francis Hospice) with the 6th part of income being donated to smaller charities – one of which is the Jack & Jill Foundation. We are asking that your school register with us and you will receive individual boxes for students to bring home and fill with their 1c and 2c coins and then return to a larger collection unit in the school.

It is estimated that there is over €32 million of 1c and 2c coins in circulation – that’s 1.2 billion coins and a portion of these coins would make a massive difference to the benefiting charities

We will be entering each school that signs up with us into a draw to win a class trip (one for primary school and one for secondary school) to BASE Entertainment Centre, Celbridge, Kildare for up to 30 students to participate in 2 activities – laser tag, bowling or soft play, with the draw taking place in September. (terms & conditions apply)
If you wish to sign your school up, or you would like Jonathan Irwin, our CEO, to come and speak to your school about Jack & Jill, please contact us at [email protected] or call 045 894538.