The Jack & Jill Children’s Foundation have launched what will be the biggest Pigs on Parade and public arts initiative to take place in Dublin in January 2015!

This follows on from Jack & Jill’s successful Big Egg Hunt in 2013 which saw 100 giant life-size pieces of Egg Art going on display across Dublin engaging thousands of people in the biggest Egg Hunt the City has ever seen. Irish artists Vincent Devine and Willie Redmond, both from Co. Offaly, unveiled the first two completed Pigs at Art Source in the RDS.
Vincent Devine’s pig design called Relativity is based, according to the artist, on abstract realism drawn from his subconscious called ‘Relativity’ and represent the mother and father of the child; representing the Jack & Jill Foundation, surrounding and draping the parents in a comforting and supportive way.
Willie Redmond’s pig design is inspired from the bogland landscape where he grew up in Offaly aptly named ‘Hog in a Bog, can’t see the tree little pig for the woods’. The Birch Trees are prevalent in the piece which conveys depth and water through bogpools and floating leaves; both dramatic and distinctive pieces incorporating their style on this unique canvas.

Similarly to the Big Egg Hunt, Pigs on Parade is a public arts initiative organised by the Jack & Jill Foundation that will see 100 unique pieces of art in the form of painted and decorated life-size fiberglass Pigs designed by leading artists and designers going on display in public accessible areas around Dublin City in January 2015. All Pigs are available to be sponsored or purchased in the lead up to the parade.
“We are very excited to launch Pigs on Parade both from a fundraising perspective and as it creates unique pieces of art for the public to view. The monies raised from this campaign will support home nursing care for our 300 sick children nationwide. On behalf of the families we support, thanks to Oman, UPS, Q102, and Kia Motors for the support to date for the campaign and also to all the 100 artists on board and to David Southern for spearheading the whole project for Jack & Jill.” – Jonathan Irwin – CEO Jack & Jill
In January 2015 Jack & Jill will invite people to find the fantastically designed ‘Pigs on Parade’ that have been created by the talented artists from around the country, with a chance to win lots of fantastic prizes. All the Pigs will then be auctioned off online and will culminate in a live auction in March 2015, all in aid of Jack & Jill. 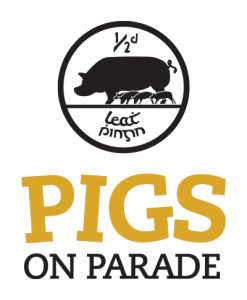