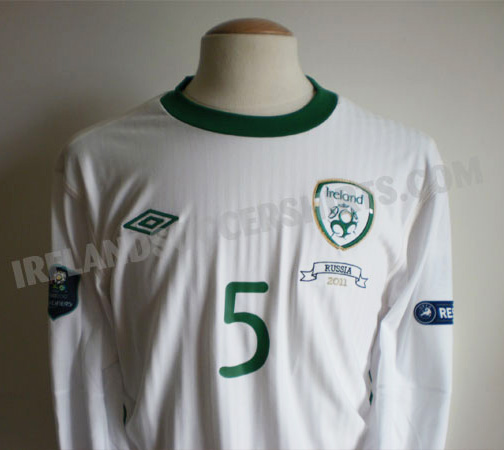 Big thank to Eddie O Mahony who has set up a virtual “raffle” to try to raise funds to support David Riordan in his run for Jack & Jill. He has donated a shirt from his private collection that was issued for use by Irish defender Richard Dunne for the European Qualifier v Russia in Moscow on September 6th 2011. This long sleeved Umbro shirt features the official tournament patches to both sleeves,the official match detail embroidered under the crest,the official number set to the front and back of the shirt and unlike replica shirts it has no sponsors logo to the front.It is Richards correct size of shirt and has recently been carefully signed to the front of the shirt by Richard Dunne himself. These shirts cannot be purchased in shops and are issued only to the team for matches and as such are very rare and highly collectible in their own right.
Tickets are limited to 150 and are priced at 10.00 per ticket.
To enter and for further details please visit :
www.mycharity.ie/event/davesrace

About this fundraiser: David Riordan is undertakeing the world famous indurance race known as The Marathon des Sable 2013 from the 7th – 12th April. This race is run in the Sahara Desert every year over a six day period.The distance to be covered is over 150 miles.This is the same as running six marathons in six consecutive days. A huge task in normal conditions but this race takes place in the 120 degree heat and sand of the desert. Dave will have to carry all of his gear on his back for the entire event.
David is funding the entire costs of his participation out of his own pocket.This includes his training costs, flights, accommodation,  entry fee, running gear, tents etc. David is keen to stress that ALL MONEY RAISED through his fundraising ventures is going directly to The Jack and Jill Childrens Foundation.
What makes this shirt special is that Ireland achieved a valuable point away from home in this match which finished 0-0. This point helped us to qualify for our first European Championships in Poland for nearly twenty five years. Richard Dunne was the Man of the Match in this game. His defensive performance ranks alongside Paul McGraths v Italy in USA 1994 as the greatest ever in our history. Richard famously suffered a nasty facial injury during this game which casued him to change his shirt during the game. Whilst this is NOT THAT FAMOUS shirt it is still a piece of Irish footballing history and would be the pride of place in any sitting room of any Irish fan. WWW.IRELANDSOCCERSHIRTS.COM

Come on You Boys in Green!