Up for auction (ending Monday 9th December around 9pm) are the Number 4 jersey worn by lock Donnacha Ryan and the Number 15 worn by full back Denis Hurley, with all proceeds going to the Jack & Jill Foundation to fund home nursing care hours for children with severe disabilities and to give their families a break, or “the gift of time” as the Foundation says.
Both jerseys were worn in the home fixtures in the Heineken Cup Group Stage in 2012 and are incredibly rare, featuring, the “Toyota Auris Hybrid” instead of the usual “Toyota” logo, and have been carefully signed by the Munster squad at that time.
Either jersey would be a great Christmas present for the Munster fan in your family, with the added benefit of helping a very worthy cause in the Jack & Jill Foundation which currently supports 300 sick children with home nursing hours, including 90 children throughout the counties of Munster.

The two auctions are being organised on behalf of Jack & Jill by a sports memorabilia collector who is a friend of the Foundation and offered his help to list these to as wide as possible an audience worldwide through Ebay. The 2 auctions can be seen at: 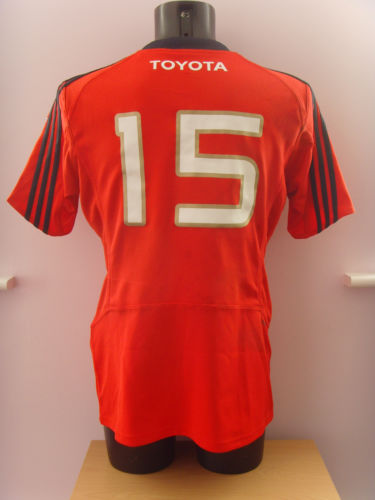