We are asking families and supporters to get sizzling for Jack & Jill by popping down to your local Dunnes Stores to pick up a pack of Hannah’s Food Company Traditional Irish Premium Pork Sausages for €3.50 for a pack of 10. 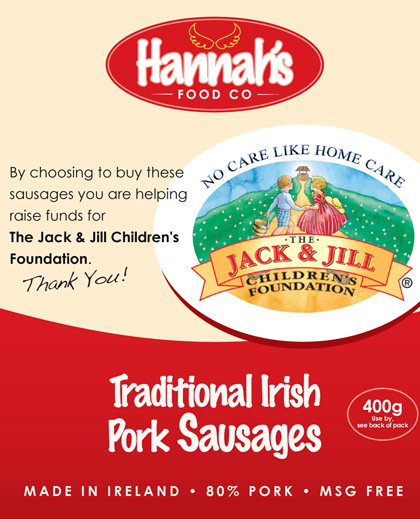 Look out for the Jack & Jill logo on pack

Hannah’s Sausages are on sale initially in 40 stores and with a bit of help from you they’ll be sold out in no time and in every Dunnes Stores supermarket:

Huge thanks to Ciaran Farrell, a third generation butcher from Rathfarnham in Dublin and uncle of Hannah May, who established Hannah’s Food Company in her memory and who is donating 50% of his profits to Jack & Jill.
By choosing to buy these sausages you are helping to raise money for the Jack & Jill Children’s Foundation and we are so thrilled to have Dunnes Stores brightening up their shelves with the Jack & Jill branded sausages.
Hannah’s Food Co. was set up in memory of Hannah May, who was taken under the wing of the Jack & Jill Foundation right from the beginning of her short life and according to her uncle Ciaran:

“As a family, we could not have survived without their vital services.   Hannah spent a lot of time in hospital, but thanks to Jack and Jill, this was greatly reduced and we could care for her in the comfort of her own home. Hannah unfortunately passed away on October 11th, 2013 aged just 7 years old.  In her memory, I have set up Hannah’s Food Co. and we are donating 50% of our profits to the Jack and Jill Foundation. Dunnes Stores have come on board and are selling our premium quality pork sausages nationwide from Thursday November 17th. Monies raised locally will stay locally as Jack & Jill supports children in every community in Ireland and by choosing our products consumers can make a serious difference to the most vulnerable children and families in our society.”